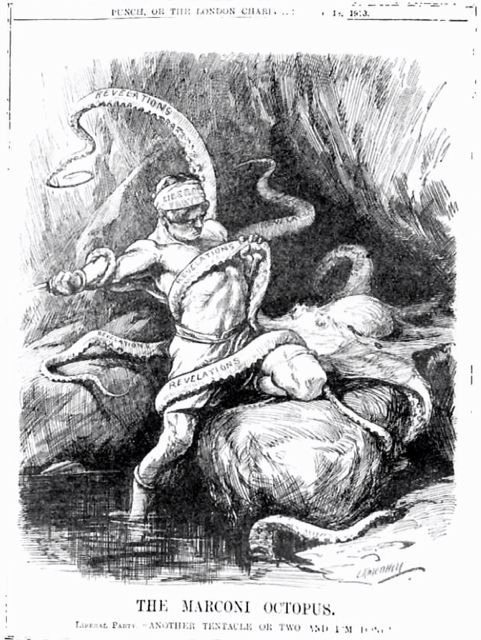 Another tentacle or two and I’m done for!

The Marconi Octopus Liberal Party – “Another tentacle or two and I’m done for!” published in Punch, or the London Charivari, on June 18th 1913.

The name ‘Marconi Octopus’ was derived from the Marconi Company who received a large  contract from the UK government to build six radio stations to ‘linking Britain to the Empire’ (1). The scandal involved three ministers – Sir Rufus Isaacs, Lloyd George and Lord Murray – who were accused of insider trading.

The cartoon above was published at the time of a charge of criminal libel against Cecil Chesterton, a publisher, (2) by Godfrey Isaacs, the Marconi Comapny’s director, went to court (3).

The court ruled against Cecil Chesterton and fined him a token £100 plus costs, which was paid by his supporters. Some supporters claimed the decision would have gone differently had Cecil’s lawyer aggressively gone after the accused ministers who were at the heart of the scandal. In the next issue of the New Witness, Cecil Chesterton repeated his allegations against the ministers, who still did not sue. (4)