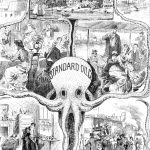 (This has been on Vulgar Army previously; this is a clearer, more detailed from Super I.T.C.H.)

Cartoon criticising ‘the pollution of New York’s air by the Standard Oil plant at Hunters Point, New York. The caption reads “A Horrible Monster, whose tentacles spread poverty, disease, death, and which is the primal cause of nuisances at Hunters Point”.