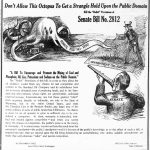 Don’t Allow This Octopus To Get a Strangle Hold Upon the Public Domain. Kill the “Relief” Provisions of Senate Bill No. 2812

“A Bill To Encourage and Promote the Mining of Coal and
Phosphate, Oil, Gas, Potassium and Sodium on the Public Domain.”

The “Relief” Provisions of this bill, in so far as they affect the
oil situation, would block any chance for real competition and confirm in the Standard Oil Company and its subsidiaries from ten to twenty thousand acres of producing lands, and in the Standard and other persons, whose rights are questionable, unlimited unproven acreage. It prevents any one but those granted “relief” from acquiring directly or indirectly, not only in the State of Wyoming, but in the entire United States, and from the Canadian Line to the Mexican Border, any larger area of the many millions of acres of public lands than 2,560 acres. No chance is given for an oil operator to grow to sufficient size to be considered a competitor. In short, monopoly is intrenched, fortified and insured against competition and when you sweep away the chance of competition, the public’s purse is at the mercy of monopoly. It is unnecessary to point out here the result from the consumer’s standpoint the public’s standpoint and it is because of the public’s knowledge as to the effect of such a bill, if enacted into law, that we depend upon the bill being defeated by an overwhelming vote unless suitable amendments are made that will eliminate “relief” and permit competition.