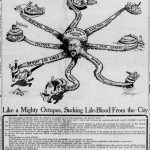 A CALL TO ARMS

Like a Mighty Octopus, Sucking Life-Blood From the City

Are the people of Seattle under the influence of opiates or are they hopelessly and literally dead?
Is it possible they do not know or do not care whether their most sacred rights and interests are treacherously sold or given outright to greedy and unscrupulous corporations, or reserved for them and their posterity?
At the meeting of the council this very Monday night, a franchise privilege worth millions of dollars will certainly be tossed over to the Seattle
Electric company, unless the people wake up and present themselves at the council chamber with a protest that cannot be misunderstood.
It is proposed to deliberately give away to the Seattle Electric company, whose owners live in Boston, and have not a vestige of interest in Seattle, except the money which they can extract from the people and carry away with them—-
It is proposed to hand over to this company, which calmly ignores the petitions and pleadings of the people of this city for more car lines and better service, the only possible outlet over which a competing or even a city car line can in the future be built from the business section to the north end of the city.
This privilege is worth millions.
It effectually and forever gives the death blow, to the possibility of a municipal car service.
Can you trust your city council to protect the interests of the people against the dark lantern methods of this foreign corporation?
Could the people of Chicago, Minneapolis, St. Louis or Philadelphia trust their councils?
There is but one way to save the city from the treacherous game of give-away that is being played between the council and the electric octopus, and that is to appear in person at the council chamber and enter a protest against this business of selling out you and your posterity which these juggling aldermen can comprehend.
THIS CRIME OF SELLING OUT THE RIGHTS OF POSTERITY IS THE MOST PERFIDIOUS THAT MEN CAN PERPETRATE. THE ORDINARY ROBBER MEETS YOU ON THE HIGHWAY AND TELLS YOU TO STAND AND DELIVER. HE DOES NOT MORTGAGE YOUR FUTURE LABOR OR THAT OF YOUR CHILDREN. BUT THE FRANCHISE GRABBER STRETCHES HIS FELONIOUS FINGERS FAR INTO THE FUTURE AND STEALS THE INHERITANCE OF THE CHILD WHOSE FATHER IS YET UNBORN.
There are 100,000 people living north of Pike street. Are the rights and interests of such a vast community to be thrown away forever?
Is the sole means of access to this great and growing district to be handed over to Mr. Furth and his foreign backers in response to some silent and hypnotic influence which he seems able to exert?

DROP YOUR BUSINESS FOR AN HOUR AND TURN OUT FOR YOURSELVES THIS MONDAY NIGHT FOR POSTERITY AND FOR THE CITY’S WELFARE.