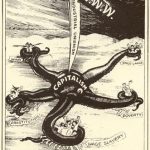 Cartoon by Pashtanika circa 1919. “Lavoratori! Diamo ancor forza al braccio!” (Arm reference to human arm, not any of the octopuses). Octopus is ‘Capitalism’, its arms are ‘poverty’, prostitution’, ‘war’, ‘child labor’ and ‘wage slavery’. Label on human arm refers to Industrial Workers of the World (I.W.W).

The note at the bottom says: “Il Proletario, an Italian-Language I.W.W. Newspaper, borrowed graphics from Solidarity and the Industrial Pioneer. The editor would usually add a caption in Italian. The above caption reads: "Workers! Give Me More Strength in my Arm!”, Hence all the text in the cartoon is in English, while the caption is in Italian. Also means it was published previously.

Compare to prohibition cartoon ’The Modern Devil Fish’, which is about the same age.