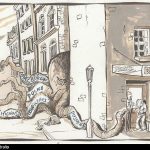 Cartoon by Geoff Pryor, published in the Canberra Times on 6 June 1979.

The octopus has its limbs tattooed as “Narc[otics] Bureau”, “Police”, “Politicians”, “Traffickers”, and “Pushers”. The only players not part of the octopus (or complicit) are the dealer(?) and buyer.

Relates to the Australian Federal Police Act of 1979. This later (October 1979) resulted in the formation of the Australian Federal Police (AFP) by merging the Commonwealth police, Narcotics Bureau and the ACT police (1). The Narcotics Bureau was disbanded with duties relating to drugs and terrorism split between the newly formed AFP and Customs (2).