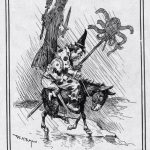 Democratic nominee William Jennings Bryan is pictured as a clown dejected by his impending defeat. He rides the exhausted Democratic Donkey through a driving rain storm, while carrying the symbols of his failed issues—free silver (bunco dollar), imperialism (tyrant), and antitrust (octopus). The scene evokes the literary analogy of Don Quixote, who tilted at imaginary windmills, and the body of water is probably meant to be the Salt River, a metaphor for political defeat.