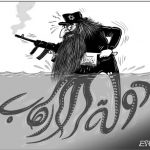 Like the Latuff cartoon this was a response to the Israel IDF boarding the Gaza flotilla. Unlike the Latuff cartoon, this is undisputedly an anti-semitic cartoon. “The cartoon depicts nearly all classic anti-Semitic caricatures of a Jew: religious, hook nosed, wearing glasses and ugly.” (via FightHatred.com, 2010).

I disagree with the Fight Hatred assessment of the use of the octopus motif as representative of global Jewish conspiracy, in this case, simply because the boarding took place at sea, as such tends to lend itself to using sea life, like, I don’t know, say octopuses? (this doesn’t necessarily mean the artist wasn’t aware of the connection).

According to FightHatred.com the caption/tentacles read “terrorist state”. (can anyone confirm this?)