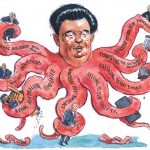 The country’s relationship with China was also dissected. The benefits of Australia’s resources boom, driven by a rapidly growing Chinese economy, were contrasted with fears of the emergence of China as the dominant power in the region. The detention of Australian Rio Tinto executive Stern Hu by Chinese authorities provided a focus for commentary. Ward O’Neill invoked the famous image of the ‘Mongolian octopus’, originally drawn by Phil May in the Bulletin in 1886, to remind us that fear of China has a long history in Australia.