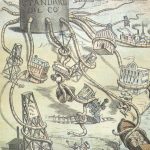 The following quote by Richard Cobden in a speech in London (8 February, 1844; Source Wikiquote, accessed 5th June 2010). It has nothing to do with Standard Oil and even less with the cartoon above, but the Corn Laws in the UK.

Well, our forefathers abolished this system [of monopolies]; at a time, too, mark you, when the sign manual of the sovereign had somewhat of a divine sanction and challenged superstitious reverence in the minds of the people. And shall we, the descendants of those men, be found so degenerate, so unworthy of the blood that flows in our veins, so recreant to the very name ‘Englishman,’ as not to shake off this incubus, laid on as it is by a body of our fellow-citizens? … We advocate the abolition of the Corn Law because we believe that to be the foster-parent of all other monopolies; and if we destroy that—the parent, the monster monopoly—it will save us the trouble of devouring the rest.