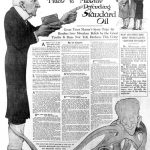 “The Great Oil Trust Master In The Act Of Telling Ministers The Virtues Of His Methods, While The Octopus Listens in Glee”; The Saint Paul globe. (St. Paul, Minn.) May 22, 1904, p.31

The introduction to the newspaper article:

Spurred into action by repeated attacks in the public prints, the Standard Oil Trust at last has come out of the shadows and invaded the field of literature, evidently proposing to try the effect of a little publicity all its own.

This, at least, is the conclusion which must be drawn from the study of a new phenomenon in the publishing world. About a year ago a book by Gilbert Holland Montague, bearing the title “The Rise and Progress of the Standard Oil Company,” made an appearance. It was published by Harper & Brothers, and that house, with unique generosity, has undertaken to give the little volume a wide circulation.