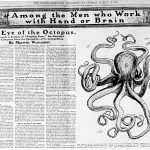 The Eye of the Octopus.

Through a System of “Peeping Toms” the Standard Oil Company Sees the Operations of Its Competitors.

WHAT do you think of the Standard Oil company and its methods?

For of all the great trusts of the time, the Standard Oil Is virtually alone In the operation of a system of spying, inquisition, and small tittle-tattling, covering not only the business of competitors, but prying into the smallest of individual and community opinions, gauging, measuring, and in the great final office of recapitulation and deduction striking its trial balances in public opinion with all the accuracy and concern involved in the distribution of one of the company’s enormous dividends.

How does the company accomplish all this tabulated information of the state of mind of Tom, Dick, and Harry of the world of business?

One might ask in half answer, “How does it know where every barrel of oil produced by an independent shipper goes and where every barrel sold by every corner grocer from Maine to California comes from?” By the interminable, unsleeping, never-faltering system of espionage based upon the philosophy of the company’s founder, “Nothing is too small and inconsiderable to neglect and nothing too formidable to undertake”; this is the system through which nothing under the sun is new to the Standard Oil company.

There is a type of man well recognized in all civilizations as of the Peeping Tom disposition and temperament. The full measure of the type is attracted to the law, partly as a profession, but largely because of the opportunity it offers to become a type of dead beat presenting at least a sort of visible means of support. This means, however, is not visible, and for a good reason, to the shyster and his clients alike.

To this Peeping Tom type in the law the Standard Oil company looks for much of its espionage, personal, political, executive, legislative, and Judicial. Certainly this particular means of support of the shyster is peculiarly invisible, and from the company’s analyses and deductions and test of community temper, quite as much as from the detail of the businesses of its competitors, the methods of the Standard are relaxed, tightened, or otherwise altered to meet and suit conditions.

Only a few years ago one of the greatest virtuous acts of the Standard, self-exploited, concerned some of the Standard’s rebates, drawbacks, and other like details of a great business so complicated and so distributed in its vastnesses that somewhere now and then somebody would some time almost necessarily fall into petty infractions of law which the head of the Standard Oil company itself could not for a moment sanction where it finally was brought to his attention up the long lines of servants, agents, officials, and the like.

Yes, a few years ago down in Ohio, the president of the Standard Oil company, concerning these small discrepancies in the conduct of the company business, pointed out that the company had refunded these certain illegal charges long before the suit asking the refunding had been filed!

How did he know when to do it? Through Peeping Toms, who more than any other agency – mental, moral, spiritual, or supernatural – have been the prompters of the omniscence with which Rockefeller and the lights of the Standard company have been so generally credited.

These Toms have peeped at times because they were afraid not to peep. They have peeped because they hoped to gain favors by peeping. And they have peeped for the reason that they have been paid to peep – paid a salary or commission or other fee in full of all demands, after peeping without regard to anything but the ends required of the Standard Oil company.

Before one of the recent Investigations by the industrial commission witnesses came and testified to the belief that at all times they and their men and the details of their business were constantly under the espionage of the octopus of Standard Oil. Here and there reports were made, that tank cars in the railroad yards of the various cities showed evidences of having been opened by Standard spies in order that the contents of these independent tanks could be determined and reported upon by Standard spies.

Admit All Agents Are Spies.

“Yes,” admitted the Standard mouthpiece on one occasion under the stress of investigation, “we ask our salesmen and our agents to keep their eyes open and keep us informed of conditions in their respective fields.” And on that particular occasion before the industrial commission in 1898 It was discovered that the way in which agents were required to open their eyes in order to keep the company sufficiently informed, as indicated in the blanks furnished for these reports to the Standard, was enough to bring about almost any disease known to the oculist!

Rockefeller, the Mysterious! Standard Oil, the Impenetrable and Omniscient! These have been the posings of the octopus and of the wizard which brought the creature into life.

But behind all of this lies the intolerable spy system of the corporation, which, if business were all that business is cracked up to be, should stand in the open, impregnable. With a capital stock valued at market prices close to $900,000,000 and paying a dividend of $45,000,000 a year – 5 per cent upon $900,000,000 – the Standard Oil monopoly still must know whether It can retail oil at 11 cents in one town while charging 14 in another, or whether public sentiment is so distributed that the 14 cents would better to charged in the one town and the 11 cents in the other.

But there are times, of course, when the Standard Is compelled to take the Vanderbilt attitude toward the public and its opinions, as when at Danville, two years ago, it boycotted the town, refusing to sell inside its city limits any of the Standard’s products from crude petroleum simple because the town’s public spirit was raised to protest over the dilapidated condition of the Standard’s oil depot and its environment.

In all the range of the Standard’s selfish interests there is not a field that Is not covered by the spies and inquisitors of the system, charged with reporting to the headquarters of the Standard’s control these sociological phenomena as they have developed in individual and community.

Twenty years ago or more the Standard had the system of espionage working in a business way as affecting the material transactions ot competitors. In 1883 John Teagle was a refiner In Cleveland in competition with the Standard. He had a bookkeeper who was loyal to the extent of reporting to him the advances made by the Standard in order to get a full and accurate account of the Teagle business.

In this case, according to the testimony of the bookkeeper, he was approached by John D. Rockefeller’s brother and offered $25 in cash and a fee thereafter, yearly, if he would keep the Standard company posted In the details of the Teagle business. In these reports upon the Teagle transactions, however, the Standard, was not to figure in the slightest possible publicity, all such communications to be addressed, to an impersonal “Postoffice Box 164, Cleveland, O.”

In this beginning of the operations of the Standard octopus, as It has come to be recognized everywhere, the necessity seemed to be largely to keep in touch with every material transaction in oil and petroleum products. Later, as a public sentiment developed and found voice In many ways, occasionally taking active form in active deeds, the sociological side of competition had to be considered, and in the last few years the eye of the octopus has been as much to be dreaded as have Its tentacles.

Recent developments In Kansas Indicate that the Standard Oil company’s spies have been asleep, or that the Standard has been taking an unduly light view of the revolutionary spirit of William Estley Connelley of Chanute, leader of the Kansas crusades against the greatest corporation in the world. If these conditions arose from the incompetency of its spies, southern Kansas agents of the octopus arc promised a shaking up that shall be lasting.

Image and text provided by Library of Virginia; Richmond, VA