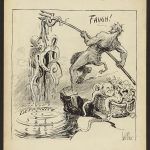 Cartoon shows the devil (shown as half man, half goat) using a trident to fish an octopus labled “Curtis Lie” out of a “Pool of Deparavity.” A basket full of octopuses, one labled “Gaston B. Means Lie,” sit on the bank behind him. The devil, disgusted, cries out, “Faugh!” The sensational event of 1932 was the kidnapping and murder of the Lindbergh baby. Many people attemped to cash in on the investigation including John Hughes Curtis and Gaston B. Means, each of whom claimed falsely that they were in contact with the kidnappers. Both men were subsequently convicted and served prison terms. Pease suggests that preying on the hopes and fears of the Lindbergh family was a crime despised even by the devil.