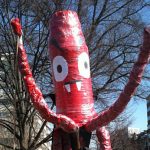 Courtesy of a dismissive article1 on a protest outside the Ritz-Carlton hotel on March 9th 20102: The Return of the Vampiric Octopus Squid. Giant red vampire squid used to depict the “blood-sucking aspect of trying to make profit … out of people getting sick”1

And then there was the guy dressed up as what looked to me like, well, a Giant Red Squid of Death. The man in a black bodysuit with a red paper mache monster growing from his shoulders called it “a vampire squid.” His get-up, he said, was meant to dramatize the profit motive of publicly traded health insurers.

Thanks to hectocotyli for pointing this one out.