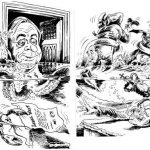 The cartoon by Dave Brown was published in the Sunday Times on the 6th Oct 1996, at the end of the “Cash for Questions” affair.

A Westminster lobbying company was paid tens of thousands of pounds to give to two high-flying Conservative MPs for asking parliamentary questions at £2,000 a time on behalf of Harrods during the height of the Lonrho and House of Fraser controversy.

Neil Hamilton, now minister at the Department of Trade and Industry responsible for business probity, and Tim Smith, junior Northern Ireland minister, were both named yesterday as recipients of payments passed to Ian Greer Associates by Mohamed Al-Fayed, the owner of Harrods, on top of a £50,000 fee for a parliamentary lobbying campaign.2

In response Ian Greer and Neil Hamilton issued libel writs against The Guardian3. These were withdrawn in late September 1996 (just prior to the cartoon), when evidence against them was produced by employees of Al-Fayed4.

The ‘Harrods Voucher’ refers to a free shopping spree at Harrods provided by Al-Fayed to Hamilton5.

David Linsay Willetts (pictured to one side, shaking) was forced to resign as Paymaster General as a result of the investigation into Neil Hamilton in 19966.

Further info/links on the ‘Cash for Questions’ in footnotes.