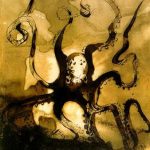 The following post aims to show links between Victor Hugo’s The Toilers of the Sea and some of the earlier octopus political cartoons from the books publication in 1866 to 1910 when obvious references to Hugo’s pieuvre disappeared. Page numbers and quotes come from the following edition (English translation): Hugo, Victor. The Toilers of the Sea. Translated by James Hogarth. New York: Random House, 2002.

Previous studies:
Moncelet (and Pierre Larousse) covered the link in an essay in Ridiculosa, and Mieville provides a compelling argument for Hugo’s role in the origins of Weird Fiction (see footnotes).

“All ideals being admitted as valid, if causing terror is an objective, then the devilfish is a masterpiece.”1

Victor Hugo’s ‘Les Travailleurs de la Mer’ (Toilers of the Sea) was published in 1866 in Brussels, with English translations published in New York in 1867 and later in the UK in 1896.2 It was a popular book and within six years of its first publication, eight English editions were published3.

Hugo begins by listing everything the octopus is not4 when compared to other animals, but, in his estimation: “And yet of all animals the devilfish is the one most formidable armed”5.

The following are a few of the descriptions Hugo devotes to the octopus: “[T]his sea creature looks as if it were made of ashes. It is spiderlike in form and chameleon-like in coloring. […] And horrifyingly, it is soft and yielding. […] It has something of the aspect of scurvy and of gangrene. It is disease shaped into a monstrosity. […] It cannot be shaken off; it clings firmly to its prey.”6

“It has no bones, no blood, no flesh… There is nothing inside it: it is no more than a skin”7.

Monocolet, in ‘Les “viles” tentaculaires’8, notes Pierre Larousse9 observation that after the appearance of ‘Toilers of the Sea’, columnists saw the octopus as a useful, if vague, analogy. This post is intended to show a small selection of octopus cartoons that refer directly to this book, and how that has shaped the octopus ‘meme’ or metaphor.

“The cephalopod – terrestrial devil fish – a monster of centralization" (1873) in my collection of the octopus as a metaphor for an industry. The presence of the cave, and the timing2 would suggest an Victor Hugo influence. It also precedes the ‘burst’ of octopus cartoons in the1880s and is slightly earlier the “Serio-Comic War Map” of Europe (1877).

Two examples of 19th C. cartoons that quote Hugo directly are: "The Irish Devil-Fish” (1881), and “The Modern Devil-Fish” (1904)10. The quotes included in the cartoons’ captions are a variation of: “The octopus is a formidable opponent; but there is a way of tackling it. […] The octopus is only vulnerable only in the head.”11

’The Modern Devil-Fish’ is an anti-saloon/prohibition cartoon published in The Defender in 190412 and shows the hand of Prohibition Party stabbing the octopus through the head. What it shows is the octopus as shorthand13 for organisations (real and imagined) such as governments, industry and monopolies. It describes a central intelligence, with interfering dangerous tentacles that spread out from the head. Cutting off the arms will achieve little, as it leaves the rest of the beast to contend with. This stabbing/spearing the octopus through the head (as opposed to cutting off its arms) also appears in ’Stemt Rood!’ (Hahn, 1918) and ’Valoroso Marinaio Uccidi il Monstro E libera l’Adriatico’ (Rico, ~1915).

’The Irish Devil-Fish’ is an anti-Land League cartoon published in Punch in 1881. It shows the Land League as the devil-fish that has entangled the UK PM William Goldstone, and it is also captioned with a variant of the aforementioned quote.

Another cartoon that quotes Hugo directly is ’La Pieuvre’ postcard (ca. 1900): “All ideals being admitted as valid, if causing terror is an objective, then the devilfish is a masterpiece” and shows several men in suits being strangled by an octopus.