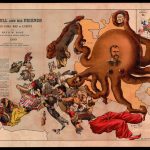 This is presumably a follow up to ’The Serio-Comic War Map For The Year 1877’1.

The “Refererence” section on the map reads3:

Great Britain – John Bull has been attacked by two wild cats. He is however able to rely on the stores of ammunition behind him, as well as his own pluck and great resources. The letter at his feet from his friend Uncle Sam, would be more encouraging were it not for the postscript. The Nationalist section in Ireland takes this opportunity to vent her abuse upon him, but is restrained by the loyalty of the people.

France too, is scolding and threatening to scratch with one hand, while with the other she is beckoning on Germany to help her. Although the Dreyfus affair is thrust into the back-ground she is much occupied with her new doll’s house. She has somehow managed to break all the toys on her girdle and her heart is sore, for she attributes these disasters to John Bull.

Holland and Belgium are also calling him unpleasant names.

Spain, weary with her recent struggles, remembers that John was in no way inclined to help her, and looks up hoping to see him attacked by some of her neighbours.

Portugal is pleased to think he holds the Key of the situation.

Norway and Sweden though still struggling to get free from their mutual leash, turn their attention to John’s difficulties, while Denmark is kindly sending him a present of provisions.

Germany (in spite of the growth of his territories in the present century) still feels cramped, with all the goods he has to dispose of. He is so occupied with his new boats that he scarcely finds time to add a grumble of bitter scolding of his neighbours.

Austria and Hungary will be content with dreadful threats

Switzerland’s satisfaction that her Red Cross has done good service, is marred by the news of John’s victories, which she is reading.

Italy alone holds out the hand of encouragement to his old friend.

In Corsica the shade of her great departed son is wondering why people don’t act, as he would have done, instead of growling and cursing.

Sardinia, Sicily, Servia, Bulgaria, and Roumania only wish to be left alone.

Turkey, resting comfortably on his late foe Greece, is smiling at the thought that these troubles do not hurt him and perhaps he is not sorry that John will not come to much harm.

Russia, in spite of the Tzar’s noble effort to impress her with his own peaceful image, is but an Octopus still. Far and wide her tentacles are reaching. Poland and Finland aleady know the painful process of absorption4. China feels the power of her suckers, and two of her tentacles are invidiously creeping towards Persia and Afghanistan, while another is feeling for any point of vantage where Turkey may be once more attacked.

Below is a reworked Russian version of that same map: ‘Europe and the world’s largest monarchy before its overthrow’5 (or ‘before the fall’), circa 19176. Remixed propaganda, early 1900s style.

And many thanks to Jason Adams of Indie Squid Kid for spotting the reworked one. I didn’t realise there was more than one Rose Serio-Comic map involving an octopus!