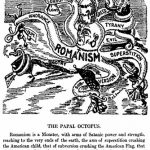 A fairly standard anti-catholic cartoon. It is titled: “The Papal Octopus – The Pope-Antichrist”, by HE Fowler, and was published in 1913 in an anti-catholic screed.

The text beneath the cartoon reads: