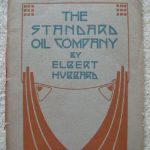 In 1910, John D. Rockefeller’s Standard Oil Company was battling efforts by the government to break up the huge organization, which contended that it was in violation of the Sherman Antitrust Act. Although the trust itself had been previously dissolved, the many different affiliates of the company still retained a monopoly in the oil industry. No doubt sensing the opportunity for some business, Elbert Hubbard wrote a piece in “The Fra” that praised the work of Standard Oil and defended it from the many words of criticism that it had been receiving. Of course, a business Little Journey soon followed, with Standard Oil commissioning a reprint of the article. Dard Hunter designed a special cover for the pamphlet, with artwork that bore a strange resemblance to an octopus. Symbolic of the company’s monopolistic stranglehold on the nation’s economy, this animal was used to depict Standard Oil in many a critical article and cartoon. Whether done as a joke, or as a statement of the artist’s true feelings about the company, the illustration was supposedly caught by Hubbard before the booklet went to press. He allowed it to be printed though, saying that the Standard Oil people would never notice. Evidently they didn’t notice, but it made no difference, as the Supreme Court ruled against the company the following year. Printed by the Roycrofters in East Aurora, New York in 1910.