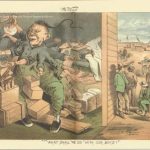 The following is from: The Ohio State University Cartoon Research Library1:

San Francisco received many Chinese immigrants because of its geographic position and the economic opportunities California offered. The Chinese Exclusion Act of 1882, a proposal to outlaw most Chinese immigration was under debate at this time and several California publications, including The Wasp, tried to influence Congress to pass this law. Many Americans opposed Chinese immigration, arguing that the Asians were willing to do manual labor for low wages and took jobs away from American citizens.

The cartoon shows a multi-armed Chinese worker with a foot on a wooden board that says “Chinese trade monopoly”. There is a bale of tobacco in the background. He appears to be making clothes, shoes, cigars and handling tools at the same time. He is holding a bag of “Earnings”. In the meantime, a group of unemployed loiter outside, and a (father? police office?) is escorting a boy to San Quentine (a prison, might be some sort of “school”). There is other writing but it is too illegible.