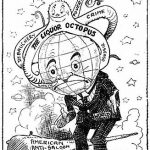 The “Pick Up the Club” cartoon by Russell Henderson was published in the American Issue – a Anti-Saloon League paper 1 –  on January 4, 1919. The caption refers to the club with “American Anti-Saloon Methods” inscribed on it, and was aimed at “The [rest of the] World”. The World has “The Liquor Octopus”, and its tentacles of ‘crime’, ‘poverty’, ‘debauchery’, ‘waste’ and ‘disease’. I am not sure what the World is supposed to do with the club in order to dislodge the octopus: hit itself in the head with it? No wonder he looks bewildered.