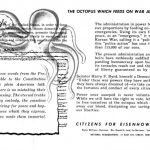 “The Octopus Which Feeds On War And Emergency” flyer printed 19521 by the Citizens for Eisenhower-Nixon. It relates to the US “police action” in the Korean War. Argues that the Truman administration  had grown “monstrous” feeding on emergencies that the administration was creating, whilst its bureaucratic tentacles threatened the liberty of its citizens.

The administration in power has grown to monster proportions by feeding on emergencies upon emergencies. … Power once usurped is never voluntarily surrendered. While we still have the right to vote, let us use that vote to free ourselves of the octopus which is surely sucking away our blood2, dissipating our savings and destroying our liberties.