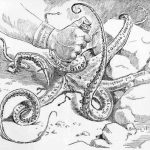 “The Modern Devil Fish” was (re)published July1 1925 in the Chicago Tribune. The is a caption beneath the cartoon that reads ‘”The tentacles of the Devil Fish cannot be destroyed unless the HEAD, the source of their sustaining power, is destroyed.” – Victor Hugo “Toilers of the Sea”‘2. The cartoon is an incitement to vote (the knife) for the Prohibition Party (the arm). The head of the octopus is the ’saloon’, and the arms are ‘political corruption’, ‘defiance of law’, ‘partnership with thieves’,  ‘traffic in girls’ and ‘gambling’.

The date of July 1925 may be a reprint date. This cartoon (unconfirmed) appeared in “Prohibition Cartoons” by  Donald Farquharson Stewart and Henry W. Wilbur with the blurb: “The cartoons in this volume originally appeared in the Defender [publishing company] during the campaign of 1904″.