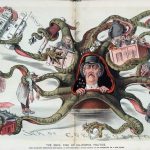 The cartoon was published in The Wasp, v. 22, Jan. – June 1889 and ’shows “highbinder” caught in tentacles of Buckley octopus’1. The caption reads ‘The Devil Fish of Californian Politics’ with a sub caption ‘ECSS Buckley’s rapacious maw equal to anything from a state capitol to an almshouse or a dog pound’. The tentacles – with their bird-reptilian like hands – have the names: teachers, state legislators, ‘Solidine’, and grasp: [chinese] ‘highbinder’,  ’spring valley water’, the courts, the school house, the fire dept, the jury, the dog house, the alms house, the house of correction, and the gas company.