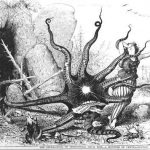 The cephalopod – terrestrial devil fish – a monster of centralization (?) (1873)

This is the earliest cartoon (1873) in my collection of the octopus as a metaphor for an industry. The presence of the cave, and the timing1 would suggest an Victor Hugo influence. It also precedes the ‘burst’ of octopus cartoons in the1880s and is slightly earlier the “Serio-Comic War Map” of Europe (1877).

I think the caption reads: “The cephalopod, -or terrestrial devil fish-, a monster of centralization”. It was published on the 4th March 1873 by the New York Daily Graphic.

Between its humanoid teeth the octopus holds a piece of paper: “Congressional Honor”. The human mouth appears below a normal octopus orifice. Most of its limbs are trains, except for the lowest one which is very serpentine. The motive (Victor Hugo) of the cave makes an appearance. As does USA (Lady Liberty?). An unusually creepy image.

Other little details is the train (at least I think it is a train) is approaching in the background, following the power lines. Also, the birds are flying an orderly and serpentine line.