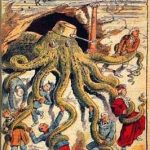 “Quel Appetit! (What Appetite!) by A. Lemot1. It refer to a scandal in France circa 1904-1905 “L’Affaire des Fiches de délation” or “the affair of the cards of denunciation”2.

L’Affaire des Fiches de délation (“affair of the cards of denunciation”) was a political scandal in France in 1904-1905 in which it was discovered that the militantly anticlerical War Minister under Emile Combes, General Louis André, was determining promotions based on a huge card index on public officials, detailing which were Catholic and who attended Mass, with a view to preventing their promotions. Both Combes and André were Freemasons, and much of the information had been collected by the Masonic Grand Orient de France. Discovery of this by the media undermined the government3.

‘Rue Cadet’ written on the cave, with the pillar holding up the entrance, refers to a masonic temple is located on Rue Cadet, street in Paris4. The pot (casserole) on the octopuses head is a common anti-Masonic symbol from the period5.