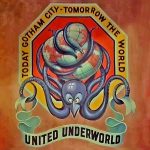 I recently found your blog (thanks to Jason over at Cephalopodcast), and I wanted to say hi to another cephalopod blogger!

I also have an Octopop submission. I don’t know if you’ve every seen the Adam West Batman movie (Called “Batman: the Movie”, oddly enough) from 1966. Anyway, the four villains in the movie (Joker, Penguin, Riddler, and Catwoman) belong to a group called United Underworld. Their emblem is an octopus squeezing the globe with the motto “Today Gotham City – Tomorrow The World.” There is a picture of it in my latest post.

Keep up the good work!
-Jason