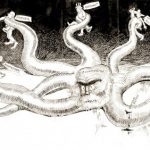 C.P Hunting as an Octopus (1896) by Jimmy Swinnerton was published in the San Francisco Examiner, December 14th 18961. The cartoon show an octopoid with trunk like limbs as a head of a bearded man, with C.P. Hunting (Collis Potter) written across its forehead. Huntington was a railway magnate and one of the “big four”2.

Each of its limbs holds either a person: “farmer”, “merchant”, “orange raiser”, “manufacturer” or an object: a piece of paper saying “honest vote” and a building with “San Francisco” flag. It has a small wound on one limb with “Johnson Defeat” written next to it.