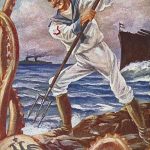 This postcard from circa 1915 by Rico shows a sailor preparing to spear an octopus with a trident. The octopus bears a black two-headed eagle with crown and red-white-gold shield on its head: the coat of arms for the Austrian Empire/Austro-Hungarian. The dreadnoughts in the background bear a flag with a white cross on a red background with blue or grey border (which looks like a simplified version of the flag of Piedmont, Italy?). It probably refers to theAdriatic Campaign in World War One.