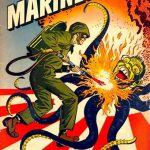 In a related note: The United States Marines did use flame throwers against the Japanese at the Battle of Iwo Jima in Feb-Mar of 1945 and it has been argued that comics such as these aimed to both dehumanise the enemy and make the use of flame throwers palatable2.

“The Marines learned that firearms were relatively ineffective against the Japanese defenders and effectively used flamethrowers and grenades to flush out Japanese troops in the tunnels. One of the technological innovations of the battle, the eight Sherman M4A3R3 medium tanks equipped with the Navy Mark I flame thrower (“Ronson” or Zippo Tanks), proved very effective at clearing Japanese positions. The Shermans were difficult to disable, such that defenders were often compelled to assault them in the open, where the Japanese troops would fall victim to the superior numbers of Marines.”3