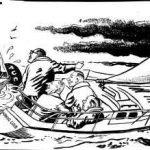 The Labour Party lost the general election in 1970, just over a year after this cartoon was published.