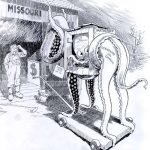 “Before the Trojan horse is admitted the puzzled citizen will have to be shown a little more fully” by Luther Daniels Bradley, along with “Hunting the Octopus”, is a personal favourite. It is a play on the Trojan Horse, obviously, with the octopus contorting itself into the shape of a horse. Published in the Chicago Daily News, 3 February 1909.