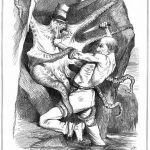 ‘The Irish Devil-Fish’ by Sir John Tenniel, published in Punch, or the London Charivai,  June 18th 1881. The captions read: ’ “The creature is formidable, but there is a way of resisting it, *** The Devil-fish, in fact, is only vulnerable through the head” Victor Hugo’s Toilers of the Sea, Book IV., Ch. iii.’1. The (stereotypical) Irish octopus is the ’Land League’2. The arms read: ‘anarchy’, ‘sedition’, ‘lawlessness’, ‘rebellion’, ‘outrage’ (?), ‘intimidation’, ‘obstruction’ and ‘terrorism’. The man wielding the knife is William Gladstone3: a former Prime Minister of the UK. It relates to the Plan of Campaign and the 1881 enactment of the Irish Coercion Act (Protection of Person and Property Act 1881), a reaction against protests and the Plan of Campaign. The Irish Coercion Act ‘permitted the Viceroy to detain people for as “long as was thought necessary”’45. The Plan of Campaign was formulated by Irish politicians for the protection of tenants from landlords6