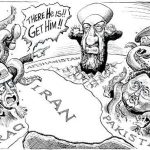 The following cartoons all appeared in 2007, and all depicted terrorism as an octopus. The Benson and Ramirez cartoons used the octopus straightforwardly: a named octopus. A subtle point in the Benson cartoon is the Al-Qaeda octopus has had the tips of some of its limbs cut off. Iraq is wielding a sword, so ispresumably responsible tip-less arms. However is currently incapacitated by a fully functioning arm of Al-Qaeda. The Ramirez cartoon is a typical octopus and cartography metaphor with the Iranian octopus interfering in surround territories and holding a nuke. The Ramirez cartoon is not directly related to terrorism, but given the context of representation of Iran in this period, the implication is there.

The Kal cartoon is quite unique. The juxtaposition of octopus and cartography is not new, but the way it is done is quiet unusual. Instead of an octopus entangling the USA and the former Prime Minister of Pakistan, Pervez Musharraf, the map/countries themselves have grown arms and have entrapped the ‘government’ while Bin Laden is free to appear elsewhere. The implication being that even if the USA can find him they are incapable of doing anything about it.