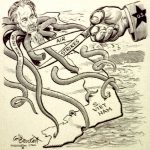 The following cartoon is by Gib Crockett and appeared in the Washington Star on the 27th of April 1965 during the Vietnam War. It shows an octopus with the head of Ho Chi Minh, and, just in case the viewer didn’t recognise him, his name conveniently written on a tentacle. The arm of the United States is attempting to cut off his tentacles with a pair of scissors labelled ‘air strikes’ in order to loosen the octopuses grip on South Vietnam: “Whittling him down”.