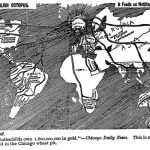 “The English Octopus: It feeds on nothing but gold” by (or published by) William “Coin” Hope Harvey was published in Coin’s Financial School 1894. It shows the “Rothschild” octopus either squatting on or replacing the UK. It has dendritic limbs that stretch over the globe/map1 into gold producing areas which also show national debts amongst other figures. A caption that appeared under the cartoon: “‘The Rothschilds own 1,600,000,0002 in gold’- Chicago Daily News. This is nearly over half the gold in the Chicago wheat pit.”3. William Harvey was a colleague of William Jennings Bryan4. Both were for bimetallism, and against using the gold standard alone. Bernstein notes that “[p]opular opinion among the Americans held that the gold standard was a devilish concoction of foreigners, especially the hated British and British Jews in particular.”5. IMAGE SOURCE: http://lyndonlarouchewatch.org/larouche-rothschild.pdf