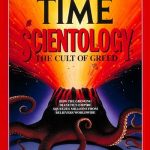 Time magazine on May 6th 1991 (artist Linda Louise Freeman?) depicted the Scientology religion as a hybrid octopus-volcano. The title, “Scientology: The cult of greed”, had the blurb “How the growing dianetics empire squeezes millions from believers worldwide”. Presumably, Scientology is the octopus giving the squeeze. However, I am not sure how the erupting volcano fits in, but it certainly novel.