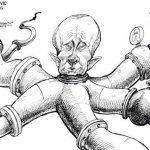 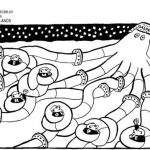 Two cartoons depicting Russia as an octopus over the dispute between the Ukraine and the Russian company, Gazprom. The first shows Putin as the Octopus5, and the second shows Gazprom as the octopus with Europe in its grip6. The cartoons are in response to the Russian company, Gazprom, cutting off natural gas supplies to the Ukraine. And consequently partially cutting off supply to other parts of Europe.

The most relevant contrast for this (thinking out loud for a moment) is the Standard Oil octopus cartoons both for symbolism and the alleged collusion between government and industry.