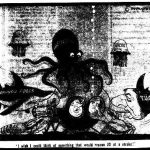 “I wish I could think of something that could rescue US at a stroke!”. According to the British Cartoon Archive1 the people represented are: Edward Heath, and Anthony Barber (1920-2005) in the submariner, and Victor Feather(1908-1976). Feather is the TUC shark: he was General Secretary of the Trade Union Congress in Great Britain from 1969 to 19732.

As the cartoon reproduction is muddy, I will recite the labels:

The Tories lost the general election in 1974, about 7 months after this cartoon was published.

The summary follows of the industrial reforms during the Heath government is from Wikipedia3:

‘Heath did attempt to rein in an increasingly militant trade union movement, which had so far managed to stop legal attempts to curb their power under preceding Labour and Tory governments. Heath’s Industrial Relations Act set up a special court under the judge Lord Donaldson, whose imprisonment of striking dockworkers was a public relations disaster which the Thatcher Government of the 1980s was to take pains to avoid, relying instead on confiscating the assets of unions found to have broken the law. Heath’s attempt to confront trade union power only resulted in an unwinnable pitched political battle, hobbled as the government was by the country’s galloping inflation and high unemployment rate. Especially damaging to the government’s credibility was a confrontation with the National Union of Mineworkers (NUM), from which the union emerged victorious. Energy shortages infamously resulted in much of the country’s industry working the Three-Day Week in an attempt to conserve energy. The resulting breakdown of domestic consensus contributed to the eventual downfall of his government.’

For more information on the industrial disputes going on at the time of the cartoons: