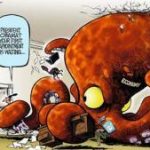 Obama and the Economic Octopus (Beele, 2009)

“President Obama? Your first appointment is waiting…” Illustration by Nate Beeler. Published in the Washington Examiner 22nd Jan 2009. Two days after the inauguration of Barack Obama as US President. The gift of a (giant rampaging) economic octopus left to him by former President George W. Bush.

When I first saw this image, I thought, wow it looks sort of expectant. But no, that was wishful thinking, it looks mean. I particularly like the emphasis that it is too big for the room (the cracks in the ceiling), and the calm in which the secretary/personal assistant is taking the presence of a giant orange marauding octopus with economy tattooed across it’s head.

The economy octopus has appeared before. This cartoon shows Alan Greenspan struggling with the octopus in 2003: although it was smaller, and called the ‘Economic downturn’ octopus then. It looks like it has grown into proper economy octopus now.