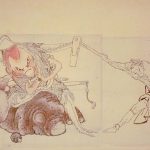 One of the earlier octopus political cartoons/caricature comes from Japan by Katsushika Hokusai. It depicts an octopus dressed as a samurai sitting on a pile of potatoes. It is in a pulling competition with a farmer over a mattock. The Pacific Asia Museum (2006) summarised the context in which this painting was created:

It has been suggested that this scene represents the struggle between the samurai warriors and the farmers of the Edo period. In 1838, a year before the drawing was made, there was a poor rice crop, so there was a shortage of rice in 1839. Hokusai’s image may represent the farmers’ hatred of the oppressive samurai landlords, which sometimes led to revolt. Hokusai, who himself came from a working-class background, may have been criticizing the injustice of the social system of his time. 1