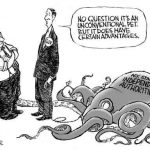 “Independent Authorities” are bodies authorized to issue bonds and incur other debt (other than tax) for the construction and operation of capital projects outside of electoral control1.

The Wilson/Marquil cartoon shows New York State Independent Authorities as an octopus on a leash held by a government official. The octopus is hoarding bags of money while pickpocketing the  bystander (the electorate/tax payer??).