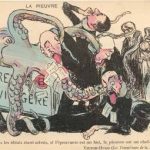 I thought a few people might find this interesting. The following is process of trying to find the provenance for an postcard, ‘La Pieuvre’. The postcard shows several people in suits being strangled by an octopus, and appears to have political connotations.

The quote:
With this image, this first thing I did was pull up Google language tools in order to find out what the quote was etc.

The artist:
Then I tried to decipher the signature in order to name the artist. In this case it was pretty straight forward: Robert Lewis.

Date:
As so far, the search had turned up nothing. I attempted to date the postcard roughly. Using a webpage as a guide: “How to date -summary” produced a rough date of between 1899 and 1903. The back of the postcard is undivided, and had the text “Republique Française”, “Carte Postale”, “Ce côté est exclusivement réservé à l’adresse”. With a space for an optional sender address.

And that is much as I have found out thus far. This has been one of the hardest images I have had to identify. But unless information is volunteered that may provide context, or I stumble across a clue in connection to this, it remains a mystery.

As an aside, it did lead to the story of Thérèse Humbert.

I don’t know if you got any further with this, but it made me curious and I’ve done a little research.

The “Humbert” on the scrap of paper is definitely King Umberto I of Italy, who was assassinated in 1900, and the scrap of paper is his will. I’ve only looked online, but I’ve found a couple of small references in contemporary newspapers to the fact that his will couldn’t be found on his death:

Now, I’ve never heard anything about this will before, and I haven’t been able to find out what happened to it or whether/when it was found. But it looks like the people on the right of the card are claimants to part of the estate, and that they’re being frustrated by our octopus – which makes the octopus either a process of law which is stopping them, or a person who is shutting out their claims.

I’m useless with languages but if you assume that the tentacles aren’t covering up any letters, the words read “Re” and “Vigere” – “Re” is the Italian for “king”, and “vigere” is an Italian verb meaning “to be current” or “to be in force.” Somebody who knows some Italian might be able to confirm this, but I’d imagine it refers to the reigning monarch, who after Umberto’s death would have been Vittorio Emanuele III – mentioned in the second NYT snippet as the “economical” (i.e. money-grabbing) heritor.

If that’s right, the box presumably represents a treasure chest belonging to VEIII in which UI’s wealth is locked away. The octopus is guarding the treasure from legitimate claimants (people with “tickets”) while the will lies discarded on the floor.

Without knowing anything about Italian law, my guess would be that if the will was never found, the whole estate would pass to VEIII; the cartoon might be suggesting that the will was hidden or thrown away so that VEIII could keep hold of the money.

Just a guess, but I hope it helps. Thanks for maintaining a fascinating site.