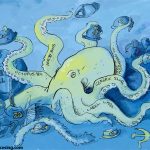 I have a problem with generic by-numbers-octopus-propaganda and political cartoons: Not that I object to octopuses being used in propaganda/political cartoons. There have been some very imaginitive ones such as: L. D. Bradley, “Before the Trojan Horse is admitted, The Puzzled Citizen will have to be shown a little more fully, . .”Chicago Daily News, 3 February 1909 and the Harper’s Weekly cover Oct 6, 1900 showing the “Hunting of the Octopus” by William Allen Rogers.

It is just, they are typically:

2) Put head (or hat) of whomever you are trying to lampoon on octopus. Alternatively, tattoo their name across octopus forehead

Which isn’t to say these techniques don’t work. Take the Trojan Horse and the Hunting the Octopus. Both use labels to show what they are trying to represent. But they don’t just dump the octopus in the middle of the page, on a map or globe and stick someones head on it.