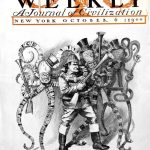 The politicians and companies represented are: Richard Croker (as previously featured) as an ‘ice trust’ octopus, Senator James Jones as a ’round cotton bale trust’, and William A Clark as a ‘mining trust’ (copper) octopus1. Each as a prominent politician of the time and each involved in a trust2.

The person leading them is Williams Jennings Bryan, the Presidential nominee in 19003. The following quote from the HarpWeek article sums up the motives behind the image.

‘William Jennings Bryan, the Democratic presidential nominee in 1900, made opposition to large business corporations (“trusts”) one of the cornerstones of his campaign. Republicans, however, attacked Bryan as a hypocrite because some of his key supporters were intimately connected with controversial business trusts.’4

For more information there is an article HarpWeek by Robert C. Kennedy.

The drawing itself is quite wonderful. A detail is provided below to show some of the detail and line-work Rogers put into the drawing.

The following is part of an editorial “A Suggestion for Mr. Bryan” that appeared in the same edition of Harper’s Weekly as “Hunting the Octopus” (p. 932) [Emphasis added]5.

It is astonishing that so intelligent a person as Mr. William Bryan, while inciting the country into a condition of discontent because of the trusts and the Imperial tendencies of this republic, should prefer to base his arguments upon figments of his own imagination rather than on concrete examples, which exist in plain sight of man. The fact that advocates of one side or the other of an abstract question frequently employ the expedient of first building up a man of straw to be subsequently demolished by the torrential force of their eloquence is no excuse for Mr. Bryan or his imitators. Indeed it is undeniable that this method of argument is a confession of weakness. The real thing not being available, it becomes necessary to construct an imaginary thing, later to be pulled to pieces; and it almost invariably happens that while the imitation is very easy to destroy, it is merely because it is purely imaginary, far more horrible than the thing itself could possibly be. Men who illustrate stories of mystery know this to be true, and that is why the real artist who is called upon to elucidate with his pictures certain situations in a narrative of a ghostly adventure rarely attempts to place upon canvas the visitant who is the more horrible when left to the imagination. When, however, there is a tangible reality which surpasses in horror that which is introduced to try the nerves of the reader or convince the conscience of the juror, neither artist nor the advocate hesitates to limn it all in its horrid details, to present the fact which is more awful than the fiction.

It is inconceivably strange that Mr. Bryan and his orators, if they are really sincere in their denunciation of Imperialism and the trusts, would spend their time and waste their eloquence upon imaginary despot McKinley6, when in the very centre of their camp is enshrined in autocratic power the most Imperial figure of modern political life, Mr. Richard Croker; should grow breathless with their fulminations against the trust, when the most vitally important factor of their party organization is trust which traffics not in oil, in sugar, in iron, in bread, butter, or strong drink, but in the bodies and souls and consciences of human beings. There may be certain hard conditions brought upon the public by the magnates who by reason of large aggregations of capital are able to capital are able to control the markets of the world; and it is quite possible that restrictions of one kind or another upon these may some day appear to be advisable; but in the working of sheer iniquity, in the promotion of corruption, in the oppression and moral degradation of men who, left to themselves, might be uplifted to a higher plane than they now occupy, the Tammany Voting Trust of New York, upon which Mr. Bryan is relying for the votes with which alone he may hope to carry the Empire States, bears away the palm from all others.

In bygone days temperance orators, dilating upon the horrors of drink, used to take with them on their tours for the purposes of exhibition on the platform certain broken and besotted individuals who were held up as “dreadful examples”. We would suggest to Mr. Bryan that in his crusade against Imperialism and the trusts he would be far more convincing if could induce Mr. Richard Crocker to join him on tour. As a dreadful example perhaps Mr. Croker would not do, for he is neither broken nor besotted. But as a shining exponent of American Imperialism, and as the very embodiment of the iniquity of the trust, he would prove the conspicuous “success” that he has always been; and if he could be persuaded to stand before the vast audiences which invariably greet Mr. Bryan when he appears in public, and state as plainly and as simply as he knows how his code of morals, we have no doubt the Antagonist of Imperialism and Trusts would win a victory far beyond he most cherished dreams.

In Richard Croker are embodied the supreme of Imperialism and the acme of trusts.