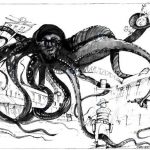 Ann Telnaes shows shows an octopoidal US President George Bush massaging German Chancellor Angela Merkel. This relates to a visit by George Bush to Germany and Russia in July 2006. At the G8 summit he apparently attempted to give Chancellor Merkel an unexpected and unappreciated back rub1.

I was discussing the octopus as a metaphor to a friend a few months ago, and she pointed out that when someone is referred to as ‘an octopus’ in a social context, it means they have a tendency to grope2. It is likely this sort of ‘octopus’ in Talnaes’ cartoon, and not the menacing octopus in the other two cartoons.

The following cartoon by Wolfgang Ammer shows a confrontation between George W. Bush and a very large octopus (Bin Laden?). Presumably representing terrorism. The octopus has partially disarmed Bush and is using his own weapons against him. It is holding the Statue of Liberty aloft. This is one menancing looking octopus. I think it is the way the arms appear to be active and it is moving towards the viewer in are rather alien motion. Bush looks somewhat dumbfounded at the turn of events.

Bush is a scary octopussy

Finally, in ‘Bush is a scary octopussy’ by Stephane Peray, the octopus and Bush have merged. And Bush is once again an octopus. This cartoon covers two issues: a jingonistic Bush administration that dismisses international treaties such as Kyoto. In this cartoon Bush II is loaded with guns. Two of which have been fired-  Afghanistan and Iraq -, and three  – Iran, Syria and North Korea – remain holstered (although Bush appears to have twitchy tentacles). I.e. he US led invasions of Iraq and Afghanistan and the eagerness of the Bush Administration to go after Iran. The second part of the cartoon is the man standing behind bush holding a pen and the Kyoto protocol. Bush II has sumarily dismissed him by covering him in ink (oil?).