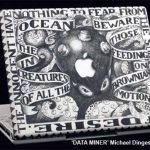 Amongst Michael Dinges “Dead Laptop Series” is this gem: “Data Miner“. The drawing is engraved plastic and acrylic paint on a dead apple laptop (hence the series name). The illustration is of an octopus with scrolls which says: “Of all the creatures in the ocean, beware those feeding on Brownian motion”, and around the edge is written: “The innoncent have nothing to fear from the surveillance of desire”1.

The artist provides the following terminology for Brownian motion: “a physics term used to describe a particle in constant erratic motion” and Data mining: “the non-trivial extraction of previously unknown, and potentially useful, information from data”2. Brownian motion is often applied to non-physical things, such as the stock market3, and in this case probably refers to the apparently random motion of data generated by the behaviour of people online4.